Here you can talk about ongoing events, provide feedback for old events, suggest ideas for new events, or just discuss events in general.
Forum rules
- Use common sense and be respectful towards each other at all times, even when disagreeing.
- Do not reveal sensitive game information. Guild secrets, player seconds are examples of things not allowed.
Post Reply
14 posts

Here you can submit your entries for the Cooking Event. You can use the format below as an example for your own. You can share as many pictures of it as you want. Be creative!

Inappropriate or trolling submissions will be removed. Let's keep it clean and fun.

1. Put water in a large pot then bring to boil
2. Slice onion into large pieces and drop in water
3. Place one cube of bouillon beef into the pot
4. Cook for 20 minutes

Recipe:
Salmon plate - just like they make at The Snowhouse!

Ingredients: Sourcing your Salmon:
Fresh-caught wild salmon is healthiest and most flavorful, but if you aren't an angler you can do what I did and trade an Alaskan a plate of chocolate chip cookies for half a Copper River salmon caught that same day!

Directions:
Melt butter in large skillet over medium-high heat. Stir in Cajun seasoning and garlic until simmering. Add wine. Stir and cook for about 3 minutes. Add salmon fillets and cook for about 10 minutes per inch of thickness, or until fish flakes easily when tested with a fork. Squeeze lemon over salmon and serve with rice or mashed potatoes and salad.

Directions:
Peppar and salt both sides heavily since most of it will fall off in the pan. This is to be done until you get nice surface on both sides. Since I made this in the oven, I turned it to 200C or 392F for you heathens and leave it in there for 20 minutes. This is mostly done due to the thickness of the steak, time may very depending on what 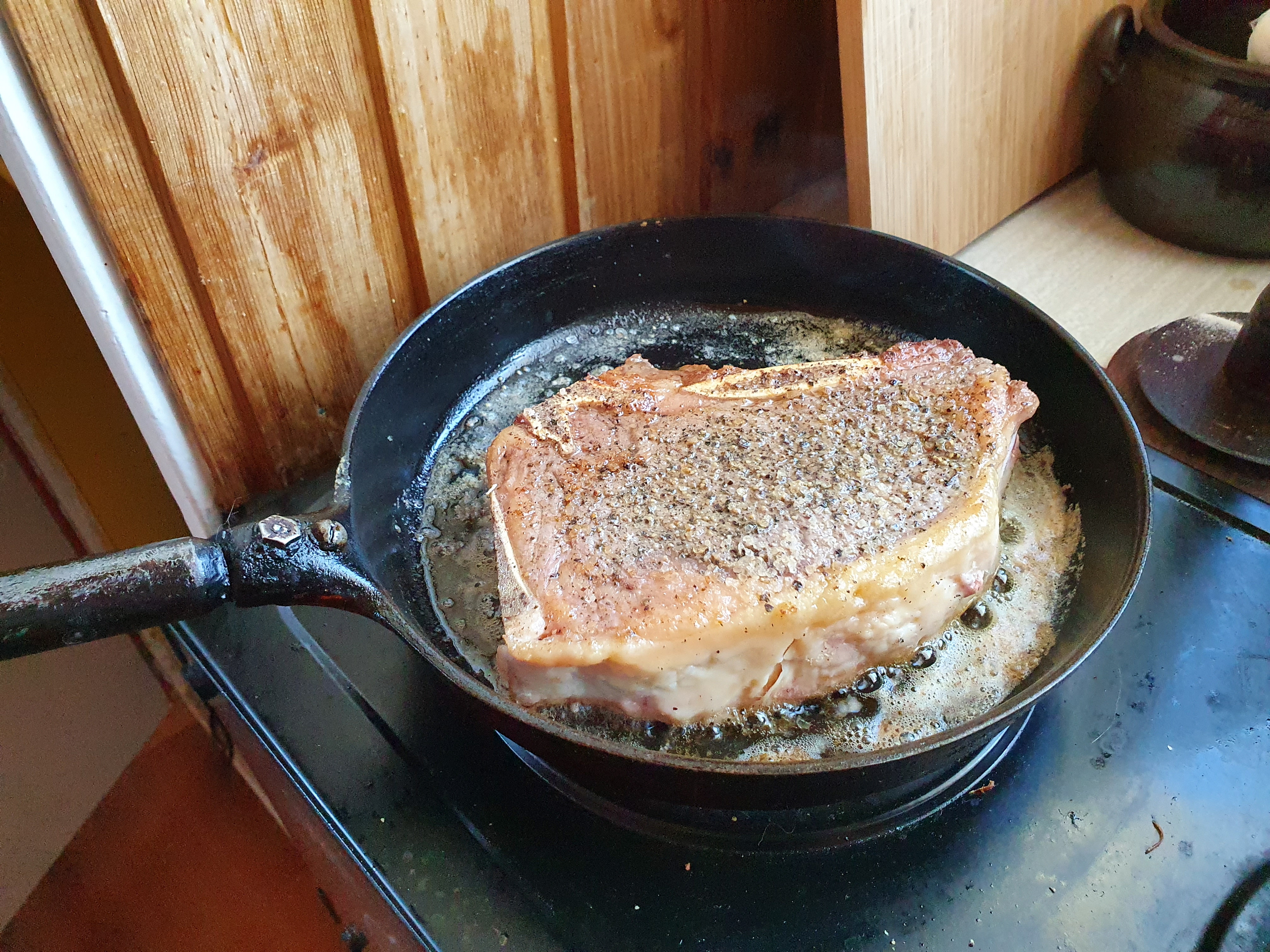 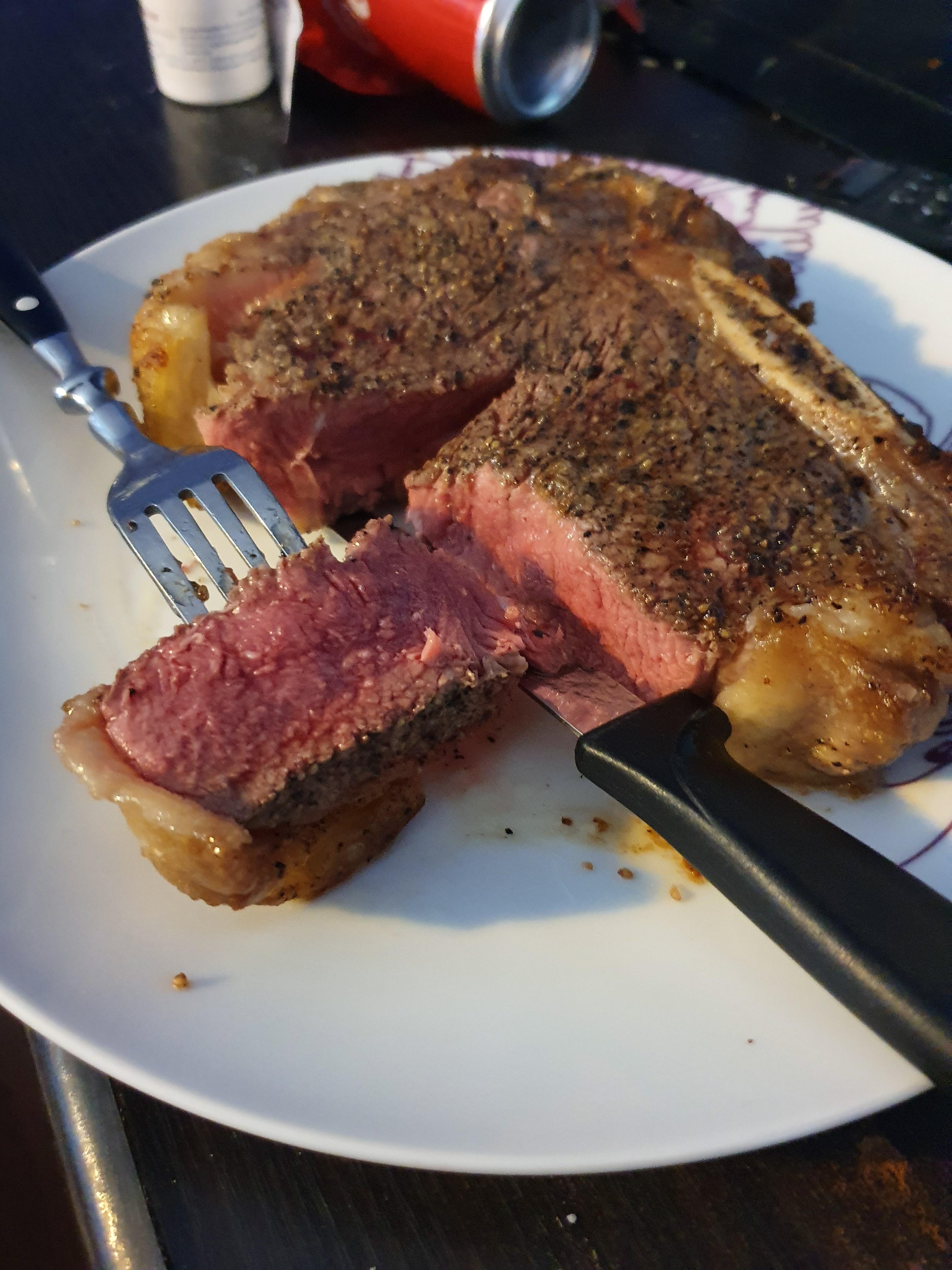 Ingredients:
400 ml vegetable stock
200 gr baby potatoes
bundle of carrots
1 zucchini
1 leek
3 garlic cloves (use big ones when your daughter has a boyfriend)
3 leaves of laurel
1 can chopped tomatoes
100 gr red lentils
3 tsp paprika powder
3 tsp turmeric
2 tsp thyme
1 tsp cinnamon
1 tsp ginger
Or to stay more in the theme of Genesis and because of the health and taste, use fresh herbs. I used freshly rasped ginger and turmeric this time.
optional 1 sweet potato
and ofcourse salt and pepper by taste.

Rangers know that most herbs are easily found in Ithilien. The salt and the lentils i presume you can steal from the haradrims nearby.

Wash and cook the lentils half an hour and then wash again. Make the bouillon.
Peel and chop the carrots, courgette, and sweet potato in cubes. Wash and chop the leek.
Chop the garlic. Heat olive oil and bake the leek, garlic, laurel and all the herbs for a minute or three. Keep stirring. Then add the potatoes, zucchini and carrots and bake for another two minutes. Add the chopped tomatos and bake for five minutes. Add pepper and salt. Now add the stock and the lentils, put the lid on the pan and let the stew cook for half an hour. Stir now and then.
Remove the laurel before you serve.
Eat the stew just as the rangers do, with bread. Try dipping your bread in the stew, ask if needed Varian for the right syntax.
Darkness cannot drive out darkness: only light can do that.
Top

Darkness cannot drive out darkness: only light can do that.
Top

Ganache:
1 bag of Chocolate chips
1 can of Whipped cream

Cake
1. Prepare three 8 inch cake pans, grease the pans, and preheat the oven to 300 degrees F
2. Add dry ingredients into a large bowl and whisk together
3. Add eggs, buttermilk, and vegetable oil to the dry ingredients and mix well
4. Add vanilla to boiling water and add to mixture, mix well
5. Divide batter evenly between cake pans and bake for 30 minutes
6. Remove cakes from oven and allow to cool for 10 minutes 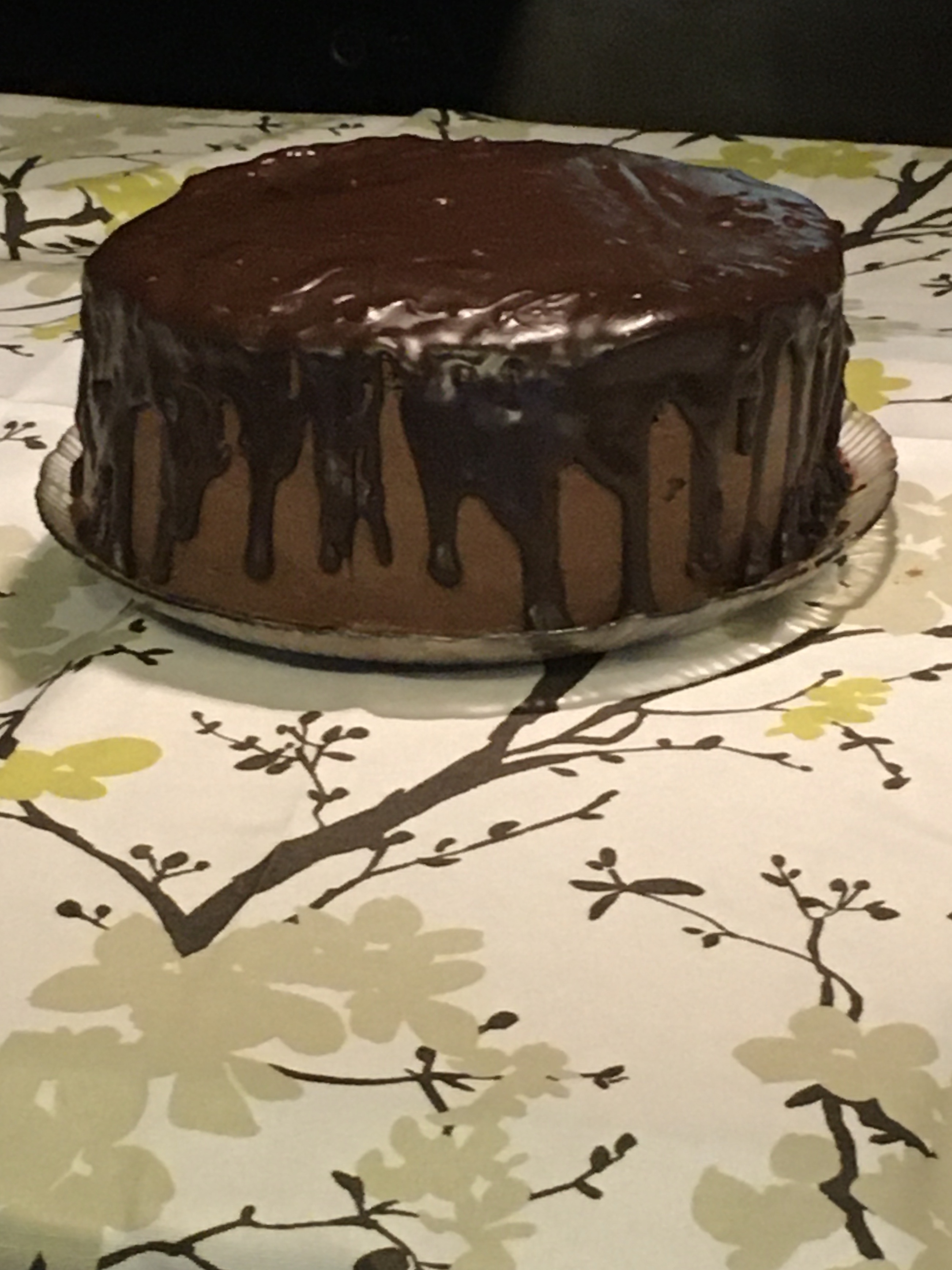 These are great! Here's my input.

Early-early spring in Quebec and the Northeastern US is sugaring-off season - when maple syrup producers boil down their maple sap to produce the dark, sugary syrup. This became a social gathering, and over the years it's evolved to focus less on the work and more on the socialization. Nowadays, a visit to a sugar shack culminates with a feast of maple and other local, seasonal delicacies. With the ground just beginning to thaw, this means a whole lot of pork (braised ham, sausage cooked in maple syrup, bacon, crispy fried pork rinds), roast potatoes, preserved and pickled vegetables, baked beans, fresh-baked bread, and drinks to wash it all down.

With social gatherings banned this year - police officers shining lights in windows and knocking on doors to be sure we're all maintaining our physical distance - some of us worked on on recreating these feasts at home. I don't remember seeing sugar maple trees around Middle Earth, but I've found that the folks there know their way around a piece of pork. In particular, the Lost Pig Inn in Thornlin is famous for their pork meals. The following recipe is for a plate with some nice fat ham like they serve at the Lost Pig, which I put together with the help of that ruggedly handsome troll hunter, Khaaz. (We're just friends, Pacal, don't get heated.) 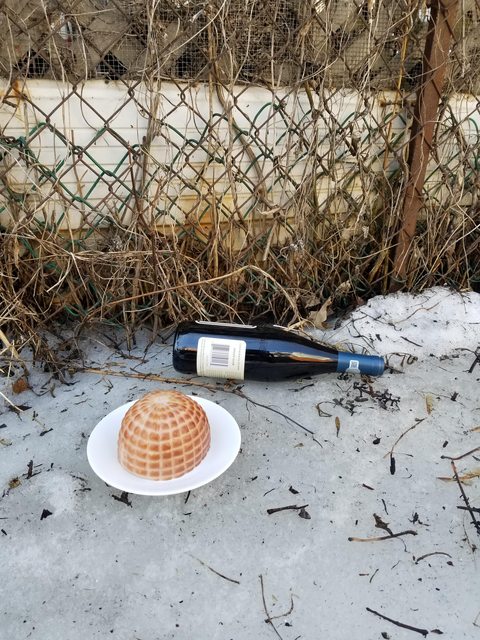 (Ham can be found on the ground near trolls, among other places.)

Step 2: Put the mustard, syrup, sugar, and cayenne in a small saucepan over low heat and stir to combine. Once the mixture is homogeneous, turn off the burner and remove the pan from the heat. Let cool while you drink a glass of wine.

Step 3: Put the ham on a rack in an appropriately sized baking dish. Pour about a half cup of water into the dish - it shouldn't touch the ham. Pour some wine into a separate glass and drink it. Brush the glaze from Step 2 over the ham.

Step 4: Put the ham in the oven and bake 1 hour or until it's heated through. I use a meat thermometer, which takes the guesswork out of things - ham should be around 145 F in the center.

Now if you've got a well-stocked pantry or qarraba, you can make some potatoes to go alongside the ham. Here's what you'll need for that:

These little black potatoes were introduced to the Greyflood river valley by servants of the so-called Witch-King. A lot of people think black potatoes are poisonous, and they are - until you cook 'em. 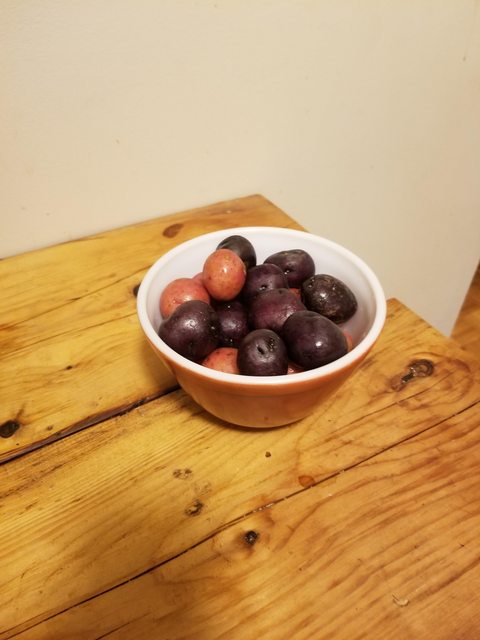 Step A: Cut the potatoes into quarters. Yeah, they're already small, but they'll cook quicker this way. Drink some wine while you work. Crush the garlic cloves with the flat side of a knife.

Step B: Heat a tablespoon of olive oil in a large frying pan over medium heat. Once heated, toss in the potato and crushed garlic cloves.

Step 3: Is your ham in the oven? Check on your ham. Brush some more glaze over it. Check that the water under the ham hasn't dried up - add some more if needed.

Step 4: Stir the potatoes around in the pan every now and then. Don't let your glass of wine dry up either!

Step e: The potatoes are done when they're soft in the middle and crispy on the outside. Sprinkle on some dried chervil if you've got some leftover from last summer. If you don't, well, have a little more wine. 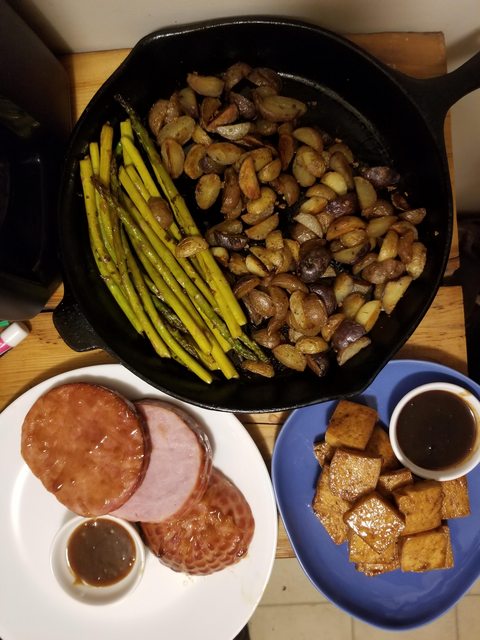 Addendum: I also made some tofu - that's what those squares are. Listen up, vegetarians: slice up some extra-firm tofu and then fry it on both sides in oil. Make the glaze from the ham recipe, but add a splash of balsamic or apple cider vinegar. Toss the tofu and the glaze together in a saucepan, and braise over low heat for 30 minutes, stirring occasionally. Have some wine while you're at it.

Addendum 2: Well damn, the photo has asparagus in it too. Asparagus can be recognized as an upright green stalk that often grows near water. Sprinkle a bit of olive oil over a handful of them and throw 'em in a frying pan over medium-high heat until the end of a stalk can be easily pierced with a knife. Salt and serve.
Top

Not much of a cook myself,but I remembered this, and knew it was the perfect piece to try and cook.A hearty bowl,this contains corn,lentils,pork and beef,chopped celery,basil,and boiled cabbage.Based off of the daily Feast in Mercenary Guild,this singular bowl will keep you going,whether it be a nice stroll through Sparkle,or an adventure throughout the deepest and most isolated reaches of Middle Earth.

We'll give a yell with a bloody curse,
And hug the maids, it could be worse,
As we ride away with the Dark One's purse,
To dance with Jak o' the Shadows!
Top

Two versions -one with pepper sauce, the other sauté with asparagus and salad.

I use the frying pan just a brief time, closing the pores on the meat - max temp, each side max 1 min.

Then oven, heated to approx 200C. Depending on your taste 15 to 25 minutes. Afterward I let the meat rest for some time, just enough to prepare the sauce.

Pour cognac on the pan u used before, heat up and add lots of pepper. Wait until part of the cognac evaporates (reduction), let it cool down a bit. Add mustard, constantly stirring. Add sauce from the meat, stirr constantly. Add cream if u like. Sauce ready.

Execution time for the meat + sauce is ca 25mins.
Add 10 for salad of choice (I go lettuce+tomatoes).

Now times are tough and ye may not be able to get outta Iso and down to the shops, or yer favorite place fer food maybe shut down and not cooking.
So here be a couple of dishes ye can make up with little fuss

Now i be giving ye the spoilers (Spoilers are not exact solutions just more help than hints at times)
So you will need to adjust amounts depending on the variables such as cooking device and number of people ta feed, write your own script for that

Todo=Brown beef 3-4 minutes each side,combine wet stuff in jug and then place all things into slow cooker or big pot, turn on low and cook for 6 or 7 hrs, or untill ye have made fanta or double fanta depending on your brute.
Put peas in with an hr or so to go
Remove beef when ready and shred with forks
Take out yer potato’s and onions and mash em how ye like with peas or for presentation peas can be on top, use the sauce to half drown the food in a bowl
Be sure to goto safe grinding area or catch up on mail or something while eating, last thing you need is ta spill it on yer lap while wimpying around

No spoiler found for this one, make it how you like. If else not able then step away from stove go back to computer and make yourself usefull by taking a newbie hunting


In game to make these you will need to:
Goto:shire milk cow,kill cow get corpse,carve corpse or take corpse to Sybarus butcher
Goto: Green Oaks gather honey,buy cheese from shop,if lazy buy fresh vegetables(otherwise search for herbs around the place)
Goto:Faerun collect eggs
Goto:Shire either put your stuff for main in the rangers stew pot, or find Gobo or orcs with a big pot if ye not mind there added flavour
Goto: for breakfast borrow a hobbits frying pan(according to Lord of the Rings they all carry one)
Place flaming crystal axe on ground or ? cook omelette with pan
Top
Post Reply
14 posts
http://tworzymyatmosfere.pl/przescieradla-jedwabne-z-gumka/